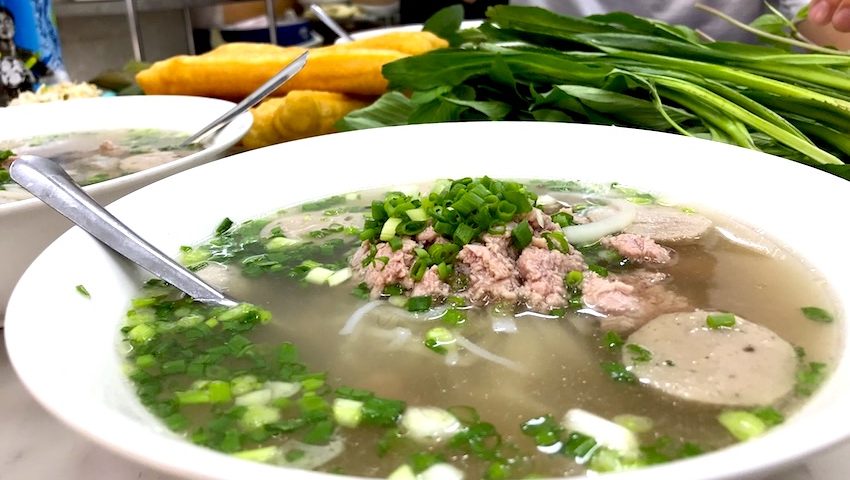 Pho is the most well-known Vietnamese dish around the world. In the simplest form, this dish consists of delicious broth pouring on fresh rice noodles. Above, people sprinkle with green onions, vegetables, and meat.

Looking for the local guide to find authentic Pho noodle soup in Ho Chi Minh? What if I say that Pho is a specialty of the North Hanoi? Well, no problem, the Saigon people (Saigonese) are easy-going. If the dishes are delicious and suitable for the mouth, they all become familiar.

Each region has its own way of making Pho, depending on the taste. Meat used in Pho is usually beef or chicken. Beef noodle soup comes first.

In 1939, when the government prevented people from killing cows by banning the sale of them on Mondays and Fridays, chicken noodle soup appeared.

For Saigonese, the type of Pho with the beef ball is the harmony of Kuy teav and noodle soup with Chinese-Vietnamese when Pho set foot in Saigon. This “adjustment” makes Southern people satisfied and put it on the top must-eat food. 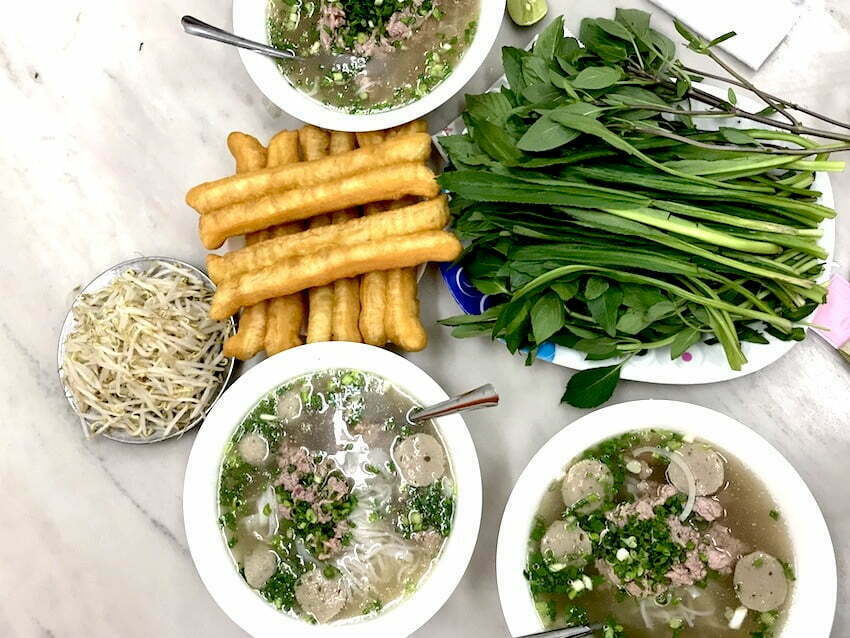 Pho is good to share with family and friends

Boiling broth long is the most crucial step in the process of making Pho. While chicken noodle soup only needs to boil 3-4 hours, beef noodle needs double time.

Bones used to simmer with water may include beef, beef ribs, and joints. According to some famous chefs in Vietnam, the cause stems from the French eating habits at the beginning of the 20th century.

The lovers quickly spread this favorite from Hanoi to Ho Chi Minh City. Here, the Southern people absorb and change the dish in a more modern style.

The Hanoi people like the clear broth, not fat. When eating, they sprinkle green onions, basil, and coriander. Some people add chili, garlic vinegar, and lemon.

But in Ho Chi Minh City, the broth is fatter. People eat pho with bean sprouts, sweet basil, mint, sweet and sour sauce, and chili sauce. In particular, the chef added quite a lot of sugar to the broth.

Today, more and more Northern people move to the South to live and settle. They also do not forget to bring along the famous Pho of the North. Therefore, Saigonese have more opportunities to enjoy this authentic Pho.

Here are local guide to find the authentic Pho noodle soup restaurants in Ho Chi Minh city and specific addresses for you!

More than one year ago, a North family open a Pho restaurant near the tallest building in the city on Hai Trieu street, District 1. The owner said the whole recipe was cooked traditionally in Hanoi.

According to the owner, they carry out the cooking stages continuously to maintain the amount of food sold to customers by the restaurant opening 24 / 24h.

Pho at this address is not as small as Pho noodles of the South, but they are also not big and thick. The cook slices the beef to large and thick pieces so that when you eat; it will feel sweet and soft.

The broth of Pho is clear thanks to the cow’s bones. In the bowl of Pho, there are lots of thinly cut onions and spring onions.

The restaurant opens from early morning to late evening. A bowl of Pho has the lowest price of 55,000 Dongs, and a specially mixed bowl is priced at 75,000 Dongs.

Usually, visitors go to the restaurant will call their favorite items such as encrusted, beef, chicken, chicken thighs. At lunchtime, many people are working in offices around the dining area. 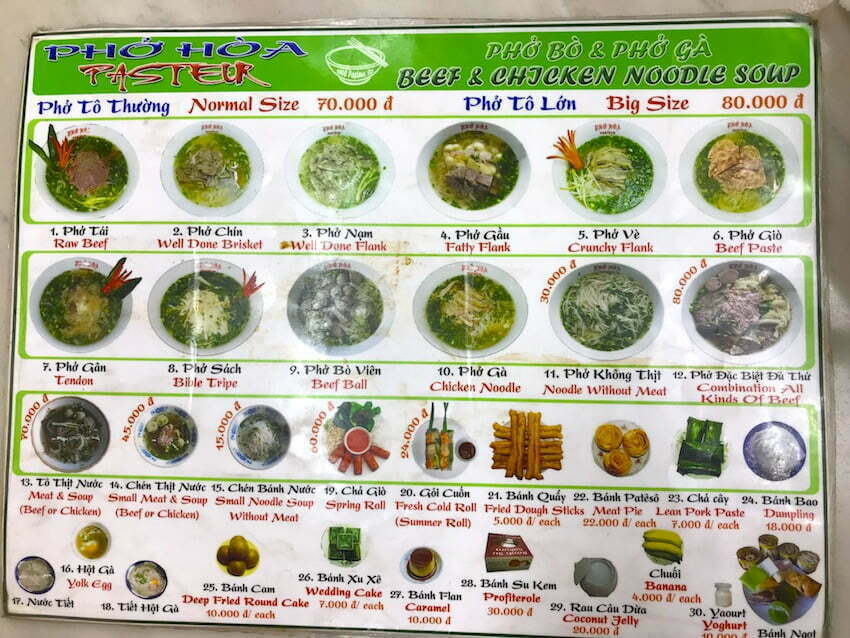 2. Pho Thin – An Ancient Corner Of Hanoi In The Heart Of Saigon

Everyone from North to South heard the name of Pho Thin. Speaking of Hanoi’s Pho, people will think of Pho Thin in Lo Duc Street immediately.

Talking about Saigon, there is also a Pho Thin restaurant, located next to the noisy and bustling Coop Mart supermarket is a noodle shop with its own space.

The layout of the noodle restaurant is like a quiet corner of ancient Hanoi standing in the middle of bustling Saigon. And Pho Thin still acquires a reputation about Pho Tai Lan; this is its particular line.

Talk about Pho Tai Lan; the cook saut the meat before adding to the soup. The cook will fire a deep pan first in about 12-15 minutes, then put ginger, garlic, and beef in and stir it quickly. Finally, he/she pours this meat into the bowl and fills the broth.

Pho has a typical pan-fried taste, blending with delicious broth, which makes the noodle bowl more special than normal Pho.

Remembering Pho Thin in Hanoi, with this noodle dish, Mr. Thin has made his name for over 30 years. And it still will be more well-known in the future. 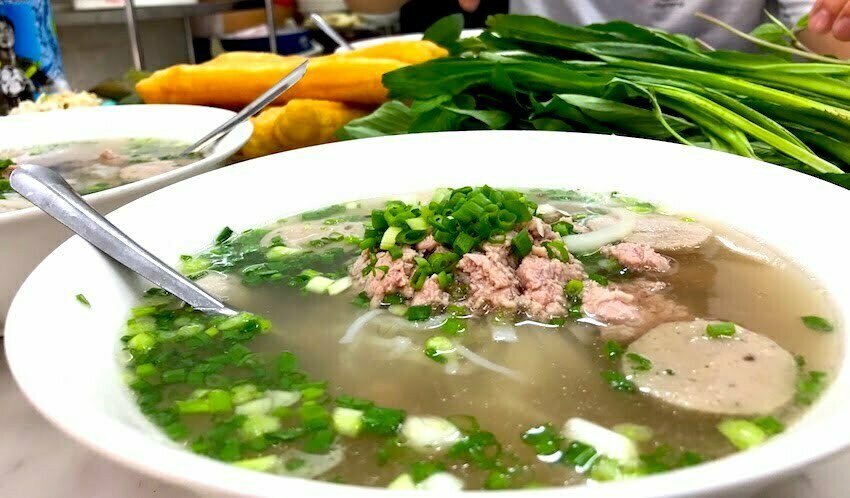 Saigon people like Pho in the northern part, so many noodle shops, even though they have been in the South for many years, still hold the North taste to satisfy their customers. 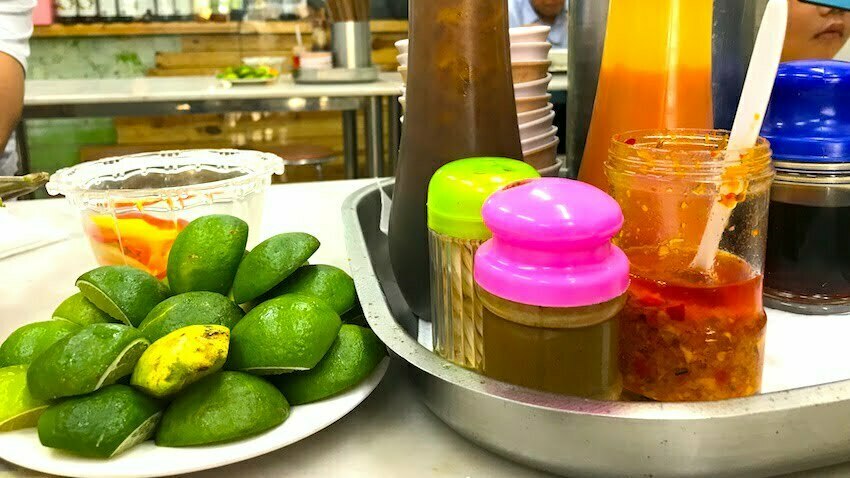 Over 55 years, Pho Dau has still not made people who are into Northern Pho disappointed whenever they visit the alley 288 on Nam Ky Khoi Nghia street to enjoy. A juicy Pho bowl eaten with the thinly sliced onion can satisfy the whole foodies.

Pho Dau has so far no vegetables, price and black sauce served as pho restaurants in Saigon. And of course, there are no beef balls for those who prefer Southern Pho.

That is what makes many people unable to feel the deliciousness of Pho Dau when eating for the first time because their taste and style of eating pho are entirely different.

They want to put into a bunch of all kinds of herbs, sprinkle soy sauce, squeeze a piece of lemon and mix well as a mixture, sit and eat well in the right way. So, when they encounter a noodle that says no to raw vegetables, they find it unsuitable.

Delicious Pho appears a lot in Saigon. There is no shortage of well-known Pho restaurants. Crowded pho also has a lot of delicious, cheap shops.

But both delicious and famous for a long time and crowded, not cheap (compared to pho), Pho Dau is one of the rare shops.

The shop in the alley, only open in the morning, is always full of guests.

On the busy road “Pasteur”, there is a 60-year-old noodle shop remains calm as if the vibrant life outside doesn’t touch it.

The small restaurant is in a small alley (alley 63). If you don’t know, you will easily miss it. And so you missed an opportunity to enjoy delicious Pho right in the center of District 1.

Going along with the years, Pho Minh’s space is also tinged with the ancient color. Tables and chairs are still of an old wooden table style, not so big. Luckily, the visitors are not noisy so you can enjoy a peaceful meal here.

Spent tens of years in Saigon, but the bowl of Pho Minh still retains the North taste: sweet broth from bone, not giving too much monosodium glutamate, no taste of sugar, fragrant ginger smell. A bowl of Pho is also very merely in , broth used in the authentic Northern style.

Many people away from Saigon for a long time, returning to find pho Minh was still delighted with the taste of pho in the past year. It is the North Pho bowl printed in the memory when not many delicious dishes like the present Sai Gon. 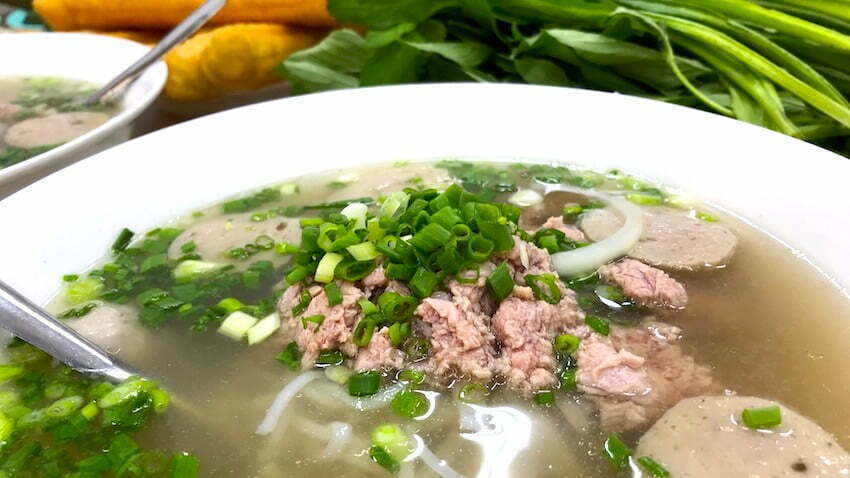 Did you try this one?

In fact, authentic North Pho is still tough to eat for Saigon people. As Saigon people like to eat sweet taste, served with soy sauce and other raw vegetables while Pho in the Northern part only has green onions and onions.

So, many people have changed authentic Pho taste to be suitable with the feeling of Southern people. 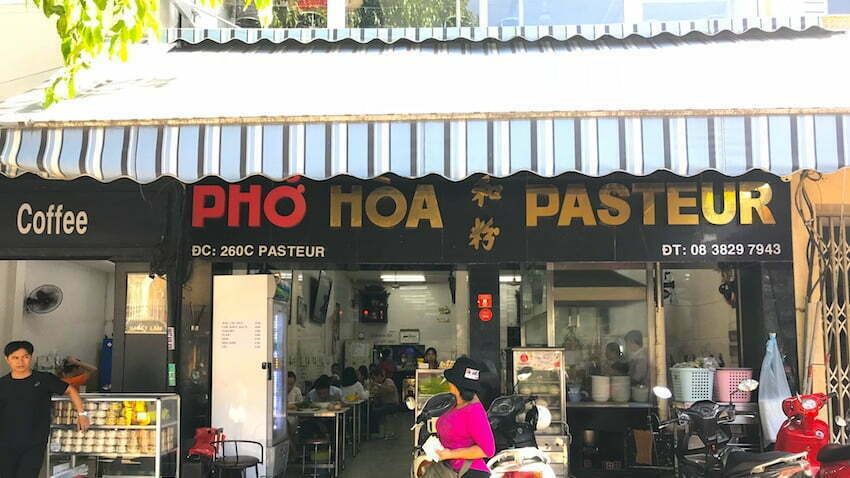 Today, the authentic Northern style Pho still exists, meaning that Saigon people are getting familiar to this flavor.

If you already try this tasty one, check the other local dishes in Ho Chi Minh for your foodie adventure. 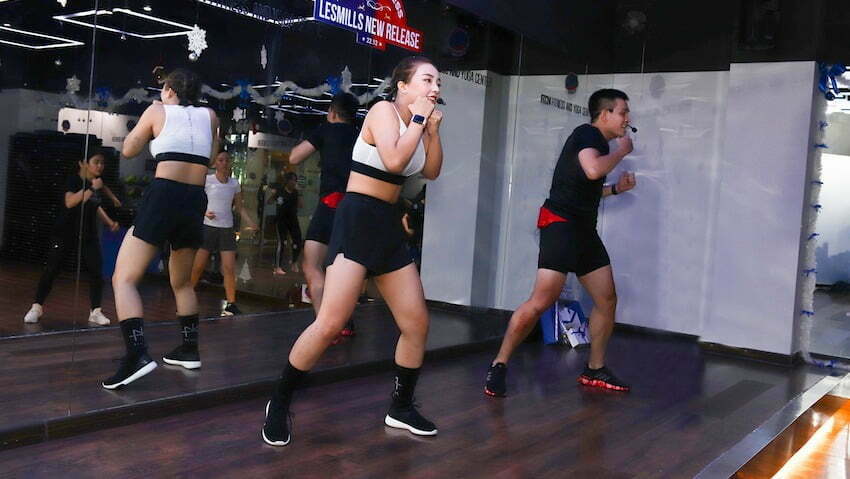 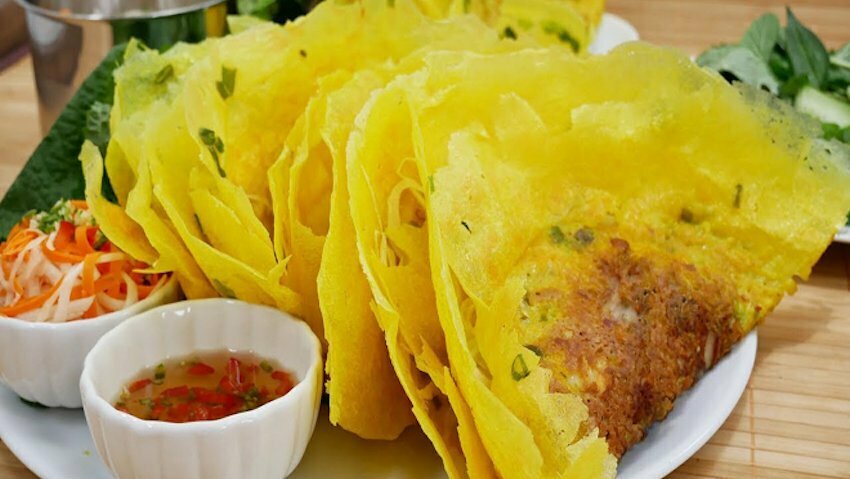 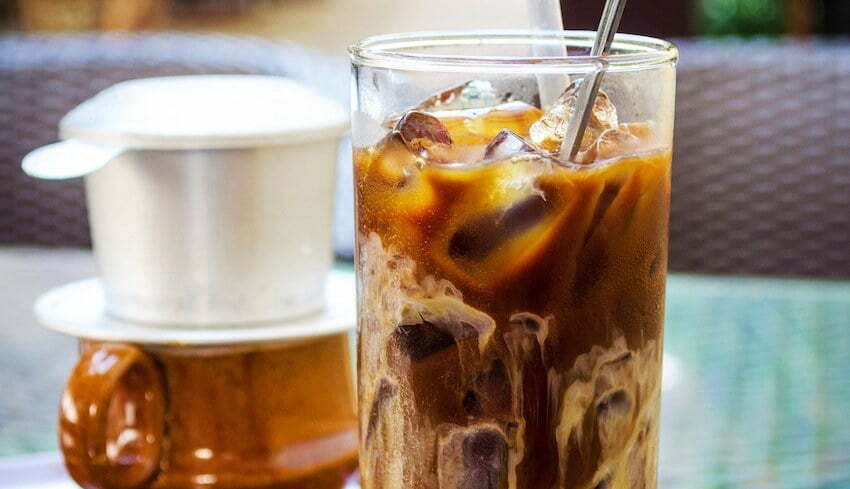 Top cafes in District 2, Ho Chi Minh that you should not miss 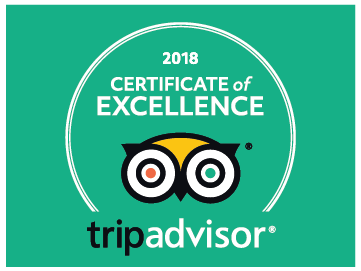